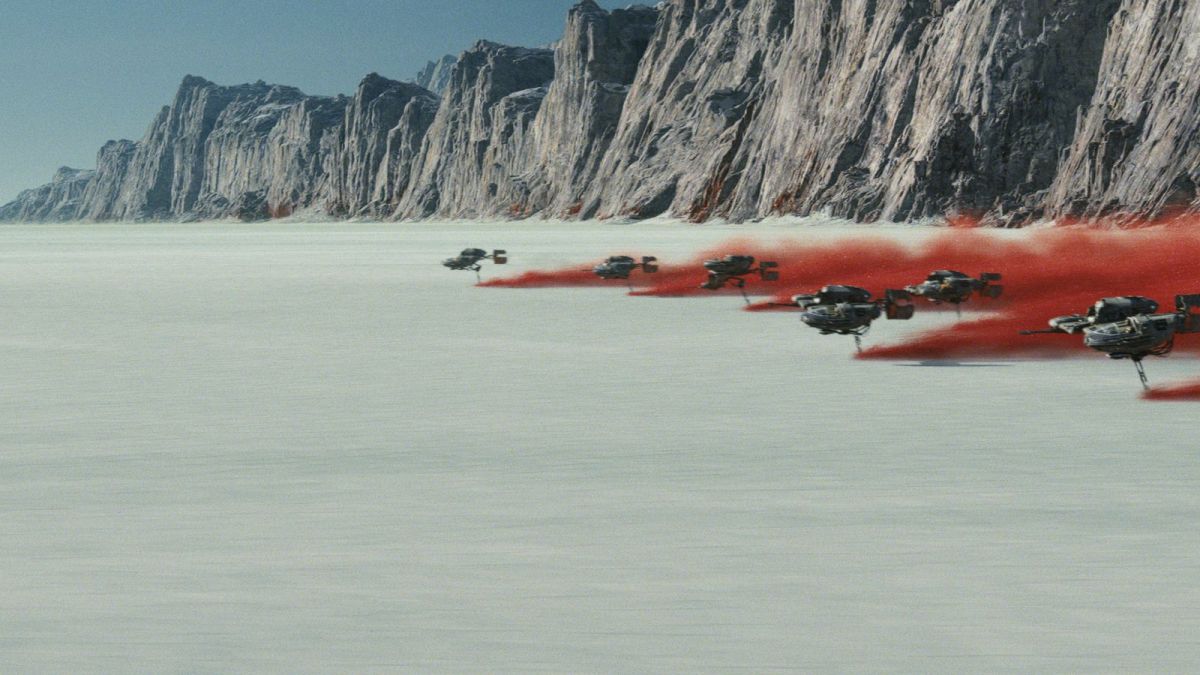 I kind of wonder about the title of this one actually, it seems to be more of a tool to enforce the premise rather than a description of what happens. If we look at the other movies the titles basically cover what happens:
- The Phantom Menace - The Sith seem to be back and causing problems... a bit of a menace really.
- Attack of the Clones - Clone army built, attacks some droids to start a huge war.
- Revenge of the Sith - The Sith come back and wreck the Jedi in a vengeful manner.
- A New Hope - Stuff's going badly, but this new kid shows up, does some stuff, and now there's hope!
- Empire Strikes Back - Yeah, about that hope, Darth Vader just cut his hand off and your rebellion is falling apart and in hiding.
- Return of the Jedi - Luke becomes the first of a new line of Jedi so they're back, he saves the day and it's going to be great!
- The Force Awakens - (I'm including this for completeness, not because I consider it canon) The Force seems to be all dark but it becomes active in a girl and now it's all going down!
You can almost make a very broad plot synopsis of the whole saga out of the other titles. 'The Last Jedi' only covers the bit where Luke wants to end the Jedi, it doesn't reveal anything about the wider plot or how it all turns out.

Having written all of that for the title alone, this better be good...

In short, my opinion of this movie is that it's a good parody. "Parody? Like Spaceballs?" Well, yes, to a certain extent. It doesn't have any of the over-the-top humour that often characterises those movies, but it definitely leans in that direction. It forms its own plot, but the plot is made of key elements from the original trilogy. Those elements are then twisted in a comical way to add humour and make fun of what has been done before.
I think General Hux is a really good example of this. In the original trilogy we had characters like Grand Moff Tarkin, Captain Needa, etc. They were all serious characters, adding a feeling of threat and control to the Empire. General Hux is just a parody of them, an overly dramatised caricature of an Imperial officer. This is highlighted by his over-the-top sneering and snarling, and his absolute blind stupidity and willingness to engage in a prank call with a rebel fighter. Don't get me wrong, it was funny, but that's the goal of a parody.
There are other places where the parody seems most obvious, when Rey 'reaches out' and then realises she was supposed to "Reach out... as in..." with her feelings. Again, this was hilarious, but not exactly the tone set in the rest of the movies. Many serious scenes were broken by humour in a similar way, not necessarily in a bad way, just not what I was looking for from a Star Wars saga movie.

With the constant feel of a parody I sometimes wonder if the writers were trying to take the originals and make some of the outcomes more 'realistic'. The reason I suspect that this was the motivation is that Poe Dameron's setup is in some ways similar to how Luke was portrayed in A New Hope and the beginning of The Empire Strikes Back. He's shown as being a heroic starfighter ace that people look up to and respect. However, Poe never seems to get it right this time around. He loses a whole bomber squadron against orders, he starts a mutiny over a wannabe-heroic plan, and that plan ultimately means many of the escape ships are shot down after being discovered. This approach is almost reminiscent of the feel of Rogue One, a slightly grittier portrayal of how things work out.

Many people are complaining about how Luke was written in this movie. Most prominent among those people is Mark Hamill himself, in some interviews he says "He's not my Luke Skywalker". He talks about how Luke wouldn't give up, and he would help, he would fix his mistakes. I do agree with this and I think the Expanded Universe does Luke's character far more justice than these movies do. However, I do understand, as Mark Hamill says, that this is a new Star Wars. The attempts to develop his character may not be as good as they could have been, but it is at least an attempt at having the character change over time. Personally I would have much preferred the awesome Luke Skywalker from the Expanded Universe, but Hamill's acting is able to carry this character so that it doesn't immediately feel out of place.

Another concern I have is that many of the key elements are seemingly ripped straight out of the original trilogy. The initial base escape seems very similar to the escape from Hoth in Empire Strikes Back, a bunch of small vessels trying to get off of a planet before the Imperial ships can get them. The scene where  Rey is brought by Kylo Ren to meet  Snoke. There were almost shot-for-shot similarities between the two scenes.
The visual design is so similar, in fact, that it could almost have been taken from the same concept art as was used for the original trilogy. I think the writers must have noticed this, otherwise why would they take an entire shot to pan to a soldier in the very familiar trenches of Krayt so that he could scoop up some of the ground covering and dramatically announce that it was salt and therefore not Hoth.
It was definitely interesting to see what the original trilogy might have looked like if it was all re-done with modern special effects and cgi, but it would have been more interesting if it was new. The prequels were in the same universe, but the difference in visual design was meaningful and showed how the galaxy was different.

The Force Awakens was just a copy of A New Hope with a couple different elements thrown in to try and hide it. The Last Jedi at least attempts to add an interesting story to the mix, but almost all of the elements are parodies or tropes of our favourite moments.

There were some new elements, we saw how things might have turned out if things went a slightly different way in key moments. What if Han had given up Luke and Obi-Wan when they were pulled aboard the Death Star? What if Darth Vader had taken less time to convince and straight up killed the Emperor? What if he then took over the Empire, falling again to his need for power and control? What if Obi-Wan had been super moody and didn't help Luke? These are all interesting things to consider and see played out, but would it not be better to have totally new situations to play out?
Obviously, it must be difficult for these writers to avoid copy-pasting story elements when the galaxy is almost identical to how it was at the time of the original trilogy (because they hit reset rather than move on). But they could have done more.

My conclusion? It's a fun movie, a great parody, but it doesn't even approach the storytelling prowess of the Expanded Universe.